Fans are the devices designed to transport air, gas and other aeromixtures through the air ducts or without them, that craete excessive preasure of different sizes.

In the industry they are used particulary for ventilation of apartments, cleaning the air indoors, on mines and stagnant zones of quarries, for creating artificial traction in boiler furnaces, for creation of gas (air) stream in technological vehicle, pneumotransport instalations etc.

The construction of fans must meet the requirements of standards, specifications, technical documentation, that include work drawings.

Aerodynamic, acoustic, vibration characteristics of the manufactured fans must meet the requirements of the current normative and technical documents on them.

In ventilation systems, fans are designed to transport air from the source of the fence to the room. These devices are for moving gases with a compression degree of no more than 1.5 (ie, the difference in pressure at the input and output should be no more than 15 kPa). In the case when the air is supplied by an air duct, they must be selected in such a way that the flow of supplied air can overcome the resistance of the ventilation network, which is created by the bends and turns of the air ducts, the presence of lattices, filters, etc. The resistance of the network causes a pressure drop, and the magnitude of this difference is the determining factor in choosing this device.

They are simple in design, technology and cheap in manufacturing, which largely determines their widespread use. The construction includes the movement of the input and output airflow along the engine axis.

The world’s first axial fan was mounted and successfully used in England in 1734. Until now they are applied in various areas of activity. In addition to solving ventilation problems, they are widely used in ventilation of apartments, in cooling electronics, in tidal installations, are used in turbofan aviation engines, mounted in aerodynamic pipes, etc.

The most prominent example of an axial fan is a propeller one. It has low efficiency, which can be increased by embedding it into a cylindrical body (in this case, the efficiency of the propeller type increases to 75%). If, immediately behind the lobed wheel, fasten the guide blades, its efficiency will increase by another 10%.

Passing of current of air through an axial ventilator.

It was first launched in 1835 and was used to ventilate the Altai mine. A construction and productivity at first assumed his use in industrial aims. First of all, this is due to the fact that they are capable to create a fairly high overall pressure due to the shape of the impeller and blades.

Sucked through the air intake under the influence of rotor rotation, due to the special form of blades, also acquires rotational motion and with the help of centrifugal force is released at right angles to the fence. 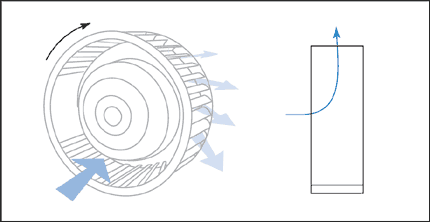 Passage of air flow through a radial fan with refracted forward blades.

Blades can have a different shape and position relative to the rotor axis. In the first case, the blades are bent backwards. The productivity largely depends on pressure of air. They are not recommended for work with polluted air. With low noise levels, their productivity reaches 80%.

Radial fans with refracted backward blades are the most effective in the narrow spectrum, that are located on the left side of the curve of the efficiency graph. And with straight blades, declined back, are very effective for working with polluted air. Here you can achieve efficiency up to 70%.

Direct radial blades prevent sticking of contaminants on the blade wheel. This type of blade allows you to achieve efficiency up to 55%. In the case if the blades are bent forward, the change of pressure renders insignificant influence on the volume of air. And with a curved forward impeller they have smaller dimensions than the previous ones and have optimal parameters in the right side of the efficiency graph, and is approximately 60%. Nowadays this type of equipment is widely used for industrial purposes.

Diagonal fans аre the synthesis of radial and axial. The air, passing through it, moves in the axial direction, and then in the blade wheel it deviates on 45 degrees. Radial impeller, due to the centrifugal force acting in the radial direction, increases static pressure. Achieved efficiency – up to 80%.

Passing of current of air through a diagonal ventilator.

Аs a rule, have the form of an oblong cylinder and a rotor in the form of “squirrel cage” – empty in the center and blades along the periphery. Instead of walls they have refracted forward blades. Collection of air takes place from frontal part. The air is captured by rotating shoulder blades, and then thanks to the diffuser it becomes accelerated in the right direction.

They produce an even airflow along the entire width of the rotor and have the lowest noise characteristics. Despite the small diameter of driving wheel, a diametral type is able to give the considerable volumes of air. The pressure created by them is comparatively low, and tangential fans are mainly used in systems where air pressure is not important – air curtains, air conditioners, fancoil, etc. The level of their effectiveness can reach 65%.

Passing of current of air through a diametric ventilator.

Other types of fans

Depending on the design and purpose, the fans can be floor, table, wall, ceiling or channel execution, as well as roof.

So the most simple example of ventilation of apartments is the use of desktop or floor type. They, as a rule, do not have a directing corps and serve only for interfusion air masses indoors.

A little more efficient ventilation of apartments, when the fans are installed in window openings, vents or special holes in the wall. At the same time, they work to remove air from the premises, and fresh air inflows are due to natural infiltration – the flow of air due to volatility in the elements of the structure.

As a rule, an inflow installation for supplying fresh air uses a system of air ducts. The tidal installation allows the production of fresh air, its prevoius processing (filtration, heating or cooling, humidification or drainage) and transportation to the premises. The most simple design of the tidal installation consists of a corps, a fan, a filter and an electric heater. The ventilation of apartments is most effective and optimal when the volumes of the removed and the tidal air are balanced. That’s, the tidal installation and the exhaust ventilation work simultaneously with the identical productivity. Such systems are called inflow-exhaust.

By implementation, fans are divided into multi-channel, duct and roof.

The distinguishing feature of the multi-zone is a corps, that allows to connect a few air ducts simultaneously. A multi-zone kind is irreplaceable on objects, where extraction of air (or vice versa) must be made out of a few apartments at once. Their application allows to optimize the networks of air ducts and cut down expenses on exploitation of all vent network on the whole.

Duct fans are the most widespread type of equipment for installation in the ventilation ducts of round and rectangular cut. They can be both axial and radial. With small dimensions, they can be mounted directly in the intersection of air ducts.

Roof fans, by definition, intended for installation on roofs of buildings. In connection with more stringent operating conditions (atmospheric precipitation and constant wind loads), their corps is made of anticorrosive materials – zincked or galvanized steel, protective epoxy coatings, etc. They can be used both for the solution of issues of general ventilation and for local one, that includes ventilation and extracting of fireplaces, stoves, gas boilers etc.

Each type of fan, depending on the requirements and conditions of operation put forward to it, may have additional design features – fire-prevention implementation, increased resistance to vibration, reduced noise characteristics, smoke removal, made of materials suitable for aggressive or dusty environments, etc.